In most parts of the world, Judo is known as an Olympic sport rather than a form of self-defense. This begs the question, is Judo good for self-defense? And is it effective in a street fight?

It’s considered the martial art of choice by millions, including notable figures like presidents Theodore Roosevelt and Vladimir Putin. There’s merit in that, surely?

In short, yes, Judo is indeed a fantastic martial art for self-defense. It teaches you close-range hand-to-hand grappling combat techniques like arm-locks, throwing, and choke-holds, making it immensely effective in a street fight. But like other martial arts, it does have its drawbacks.

Judo was created in 1882 by Jigoro Kano. It’s one of Japan’s first organized martial arts.

Jigoro Kano had a small physique, making him the prime target for classroom bullies. To strengthen his frail body, he started taking Jujutsu classes in Tenjin Shin’yo.

Ever the bright student, he studied the Kito-Ryu and Tenjin Shinyo-Ryu styles of classical Jujutsu and eventually mastered them. He was a Jujutsu master by the age of 21.

Although he was known as one of the best Jujutsu masters of his time, Jigoro Kano wasn’t quite satisfied with the sport. He didn’t like how dangerous old Jujutsu was; it went against his morals and beliefs. So, Jigoro Kano took all the essential aspects of Jujutsu and created Kano Jiu-Jitsu, which is now widely known as Judo.

Judo is a dynamic combat sport where participants lift and throw opponents to subdue them. Victory is claimed through ippon, which can occur in three situations:

Is Judo Good for Self Defense?

Since striking techniques are forbidden in Judo competitions, Judo doesn’t teach you how to defend yourself against strikes. This limits you to holds (katame waza) and throws (nage waza). But self-defense isn’t only about hurting the aggressor with strikes.

Grappling, throwing, and sweeping are indeed effective ways to fight, especially as they more so rely on technique and control rather than physical strength and brute force.

Instead of doing damage with strikes, Judo teaches students how to subdue the opponents through throws, joint-manipulating holds, armlocks, and strangleholds.

But the lack of any type of striking makes Judo fairly imbalanced and, dare I say, “weaker” compared to complete combat systems like MMA and Sambo.

Now, this isn’t to say that Judo isn’t good for self-defense; because it is.

In real life, though, you don’t really need to learn the “best” martial arts to successfully defend yourself. Judo, if taught well, can be extremely effective for self-defense. 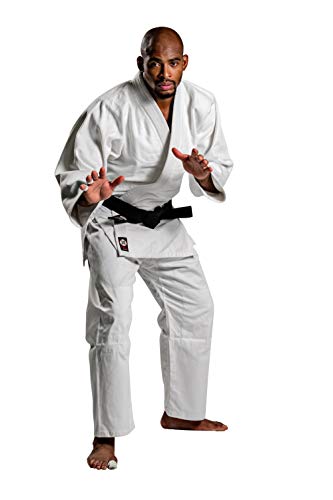 Why Is Judo Good for Self Defense?

Although many argue that the best way to defend yourself is through fists, martial art masters—particularly Judokas—believe otherwise. After all, throwing an opponent on solid concrete ground is way more effective than punching them in the face.

In practice, Judo masters teach their students how to take a fall, how to run, how to fly-roll over obstacles, and how to wrestle. They also show their students how to fend someone off with their feet and break a stranglehold. These techniques are tremendously useful in self-defense situations.

Another great thing about Judo is that it can be learned by anyone of any age, weight, height, and experience level. Unlike boxing and wrestling, Judo doesn’t have any physical limitations, as proven by its participation in the Paralympics.

Finally, Judo teaches you how to redirect your energy to take down larger opponents. It shows you how to use as little energy as possible so you can fight longer before fatigue sets in. Also, grappling and throws allow you to use your opponent’s clothes to take them down, removing the need for dangerous weapons.

Judokas with years of experience can be extremely dangerous. However, violence isn’t what Judo is about. It revolves around the philosophy, “the gentle way.” Therefore, in self-defense situations, Judo must only be used to subdue the opponent rather than hurt them.

Judo is definitely good for self-defense. It allows you to fight off opponents even if they’re larger and more powerful than you. Plus, it doesn’t take a lot of energy because it teaches you how to efficiently utilize certain techniques depending on the situation.

Since it doesn’t use kicks, punches, and other forms of strikes, almost anyone can learn it. This might seem like a disadvantage, but the lack of offensive techniques actually reduces the risk of physical injuries such as broken fingers.