You may have seen it in action on TV or in an MMA ring but if you’re cornered in a street fight, how well could you defend yourself with Brazilian jiu-jitsu? Is it actually an applicable fighting style or is it just for fun and exercise? The answer likely won’t surprise you.

Brazilian jiu-jitsu trains you to avoid fights at all costs but if put to the test, it is a lightning-fast form of self-defense created to take down opponents much larger than yourself. By redirecting your opponent’s weight, you can throw them to the ground and force them into submission.

Let’s explore in more detail how Brazilian jiu-jitsu performs in a real fight and discuss some of the advantages and disadvantages of this unique fusion fighting style. If you’re ever forced into a physical altercation, BJJ could save your life.

What is Brazilian Jiu-Jitsu?

Brazilian jiu-jitsu is an evolution of the Japanese martial art jiu-jitsu. It originated in Brazil after a Japanese diplomat introduced the original martial art to a Brazilian population. Compared to the original Japanese jiu-jitsu, BJJ is more focused on grappling and ground fighting whereas the Japanese variety is more concerned with throwing your opponent and manipulating their joints.

Brazilian jiu-jitsu is often practiced in a gym and is better suited for sport, whereas Japanese jiu-jitsu was designed specifically to be a form of battle-ready self-defense for samurai who had lost their weapons. This often leads people to question whether BJJ is actually effective in a real fight. If you’ve ever seen an MMA match, you probably know that it is.

Is BJJ Effective in a Real Fight?

Most professional MMA fighters practice BJJ at some point in their careers. Without it, they wouldn’t be able to position their opponents into advanced-level grappling techniques such as the guillotine, arm-bar, or leg-lock. Nonetheless, you shouldn’t expect to perform like an MMA expert in a real-life fight without adapting what you learn from BJJ.

Most BJJ gyms teach with a focus on sport rather than self-defense but in a street fight, your opponent isn’t going to fight with the same rules you learn in a gym. To put your BJJ skills to use in a real-life situation, you’ll have to forget the rules of combat and approach the fight with an intent to inflict quick, sharp damage.

How to Adapt BJJ to Self-Defense

Even from a sports focus, BJJ is still an effective martial art and it doesn’t take much work to adapt it to street fighting. You just have to know which tenants are most applicable: 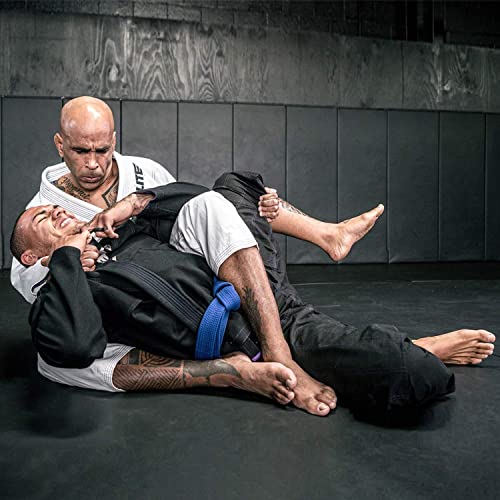 Advantages of BJJ for Self-Defense

Compared to other forms of self-defense, BJJ works well in a real-life situation thanks to how it’s taught and the practicality of its techniques. Even in a sports-based situation, you’re taught to fight against an opponent who’s resisting your moves, reinforcing how to fight in an actual altercation.

All BJJ techniques are taught to be used. Unlike other martial arts that teach ‘too deadly to use’ techniques, you’ll be able to practice every single move in a gym with a living human opponent. BJJ techniques are also fluid, making them far more adaptable than static strikes and kicks.

If ever attacked in the real world, you’ll have a foundation of practical fighting experience that fall back on. Even if you’ve only trained in a sports-based arena, your first-hand knowledge of hand-to-hand combat will prepare you to grapple in real life.

Disadvantages of BJJ for Self-Defense

Not all martial arts experts agree that Brazilian jiu-jitsu is enough to survive an actual street fight. To give a balanced view, we’ve presented some of the most common criticisms of BJJ to help you understand where you might struggle in a real fight. These criticisms are generally presented from the view of other martial arts practitioners.

With these criticisms in mind, if you’re ever in a situation where you’re ganged up on or someone draws a knife on you, remember the principal teaching of all martial arts—you shouldn’t seek out a fight. If necessary, don’t be afraid to run. The best defense is to not even engage.

Although no martial art teaches everything you’ll need to become a living, breathing, killing machine, BJJ equips you with enough foundational experience to dominate in a street fight. As long as you can adapt what you learn in a BJJ gym to the real world, you’ll have no trouble standing your own ground if threatened.

In fact, I would even go as far as to say BJJ is one of the best martial arts you could learn for self defense!